This 1x drivetrain thingy always gives me mixed feelings. On one hand, it’s extremely simple, looks great, saves weight (I guess) and it’s easy to maintain. On the other hand, most out-of-the-box 1x-specific drivetrains are rather pricey. MicroSHIFT is basically the only exception, and the 8-speed Acolyte would be so good to try, but I couldn’t find it for sale anywhere.

You know me, I’m pinching pennies on my builds, and I have never ever purchased a complete new groupset. Hell, I have never bought a brand new derailleur in my entire life! But this doesn’t mean I’m determined to use worn out, low end stuff.

The Marin (the Redwood of course) is just fantastic in every aspect. It absolutely did not need an upgrade in terms of drivetrain, brakes, or anywhere else—except for the saddle. But the idea of a 1x conversion was just too damn tempting. The final nail in the coffin of my triple setup was catching a Gazelle, that came with a XT 760 crankset (I had intentions to keep that bike, but its fork was brutally out of alignment, so I parted it out). I ordered a 104BCD 36T NW chainring from Ali, and started thinking about the next step.

I drew the line at 9 speed. I didn’t want to go above that, because chains, cassettes and basically everything else are getting hella expensive for me to justify a purchase. Not to mention they are also a lot more fiddly to index. We’re talking about a nearly 30-year-old CrMo bike—chances of having a properly straight derailleur hanger is close to zero. I really wanted to go 1×8, but wide range cassettes and proper looking (and functioning) shifters were a limiting factor. So then, 1×9 it is.

The upgrade had two phases. First I installed the XT 760 crankset (which meant buying tools for Hollowtech II). Removing the original BB wasn’t the easiest job, as it had developed a hefty amount of corrosion on its threads, making it difficult to unscrew. Thankfully I got myself a nice 750 mm breaker bar a few months back, and I was quite fond of the idea of finally using it. Once I cleaned up the threads, I installed the Hollowtech II BB and the crankset. I have never dealt with integrated cranksets before, and I was pleasantly surprised by how easy the whole installation process was. 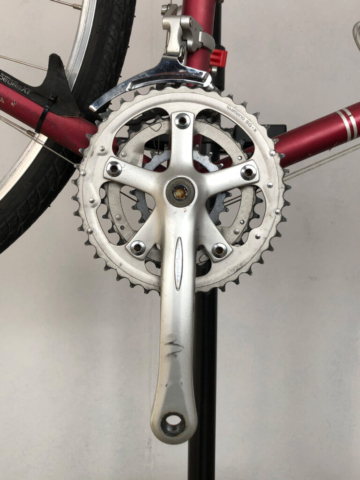 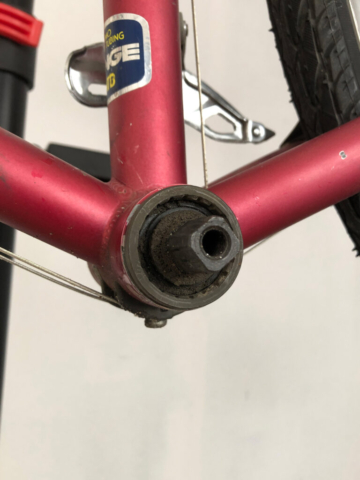 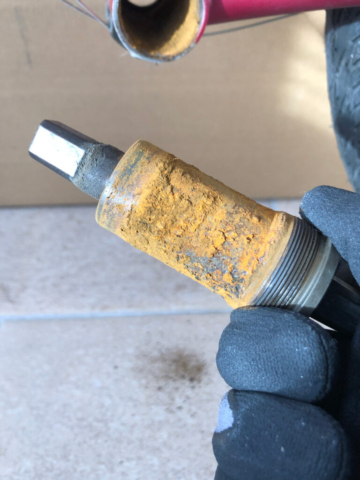 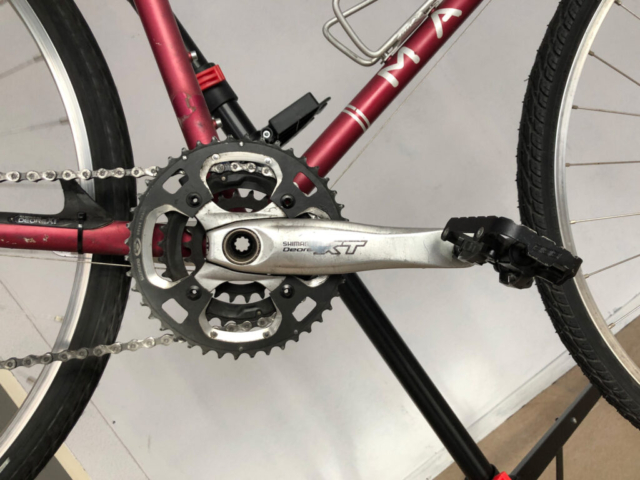 Literally seconds after I tightened the last screw, the NW chainring arrived from the Far East—needless to say it was installed right away. The Marin got one step closer to its final form. 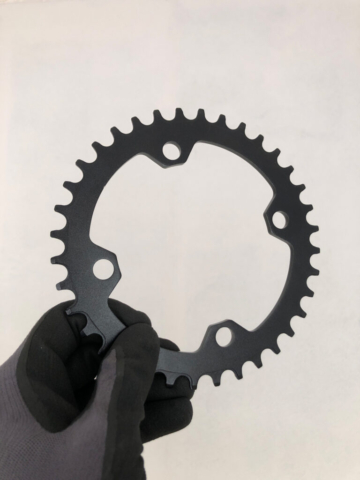 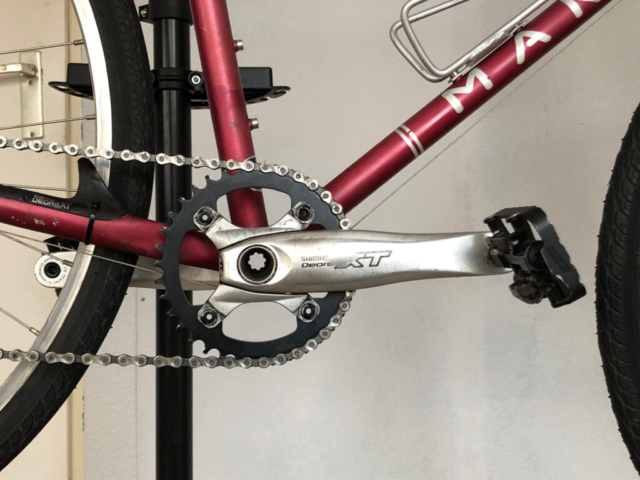 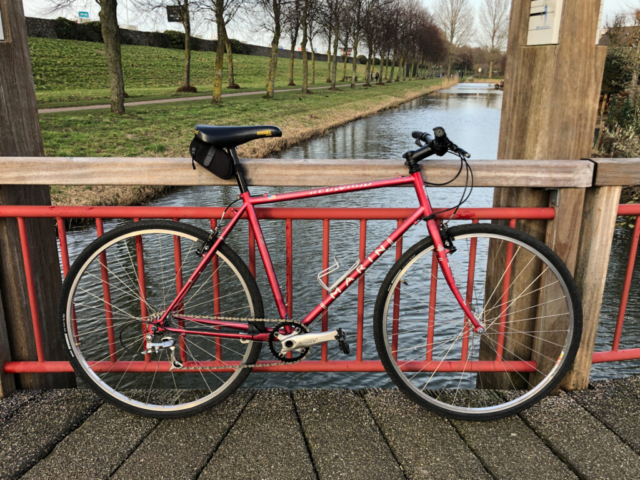 Phase one’s 1×7 gearing wasn’t particularly handy, even though the Netherlands isn’t really famous for its steep climbs, it’s just not very sufficient, since the default 700CX cassette is very low-range. Phase two had to be initiated. I already had an SLX RD lying around, and I intended on using it. No clutch? No problem, its springs are really strong and the NW chainring should eliminate any chain drops, because I’m not planning to use this machine for heavy off-road rides.

The original 700CX/Araya VX 400 wheelset was truly lovely (besides the fact that the front hub was kinda shot already), and I really did not want to change it, but the freehub just wouldn’t take anything wider than a 7-speed cassette. I wanted to change the freehub body only, but then a local ad came up: Shimano WH-RS11 wheels, de-stickered, but basically brand new—bargain price. I went to pick it up on the coldest, iciest day of the year. I was basically skating on the sidewalk, praying I won’t fall on my butts and damage myself (and more importantly, the freshly acquired wheels). I installed the tyres and tried the wheels into the frame. Silky smooth bearings, ridiculously straight running, and lighter than the old ones too… No regrets. 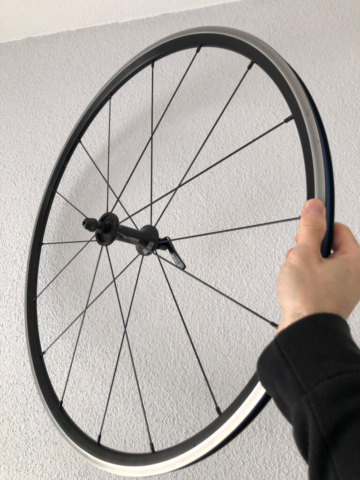 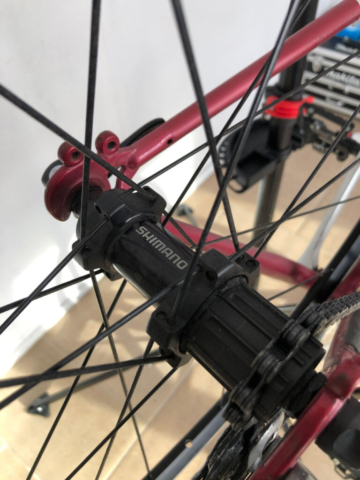 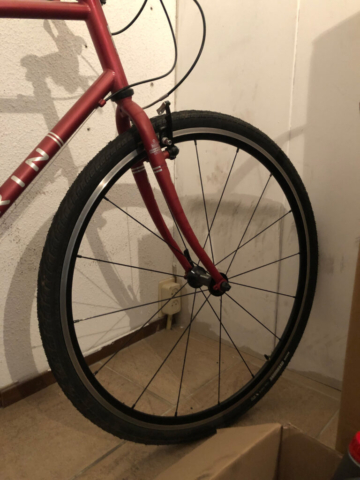 After carefully browsing around and hunting for the remaining stuff for nearly a month, I finally decided to take the bullet, and ordered a new chain, cassette, brake levers and some other miscellaneous components. I was really excited when the final package arrived. 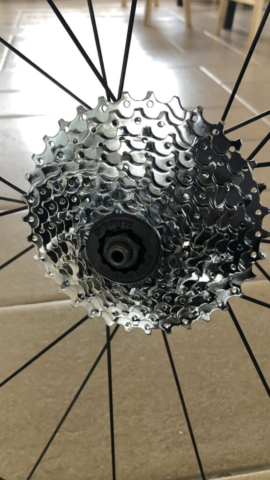 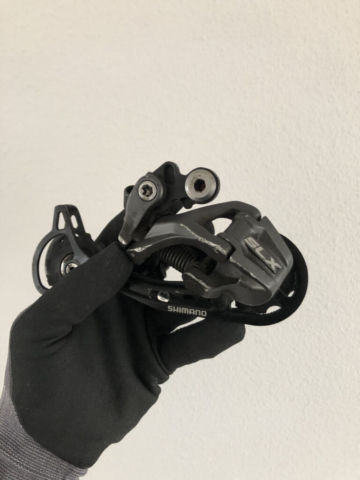 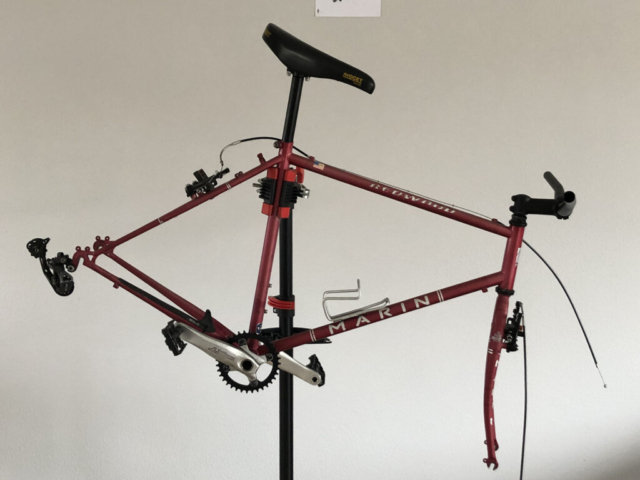 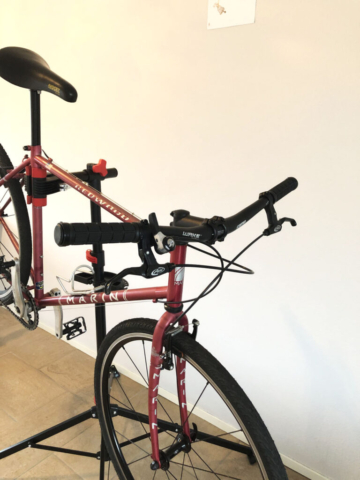 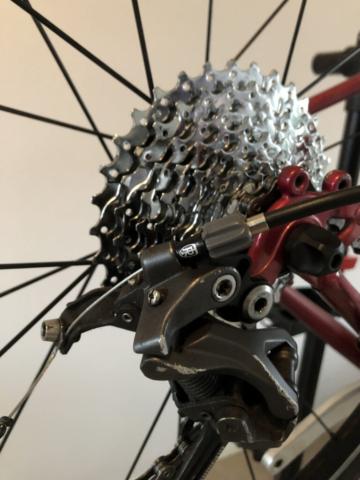 This was one of the quickest and smoothest upgrades ever. Pretty much everything went on quickly and easily, albeit the indexing wasn’t particularly easy to make pitch-perfect. In hindsight, my initial expectations with the derailleur hanger were not wrong, I’m pretty sure it’s a tiny bit bent—which was enough to throw one of the gears off. The SLX RD doesn’t have a built-in barrel adjuster, therefore I ordered a Ritchey one, that’s basically meant to be installed to the cable exits of Shimano STIs. Well, I simply popped it into the cable entry of the derailleur. Quite a bodge, but it worked! 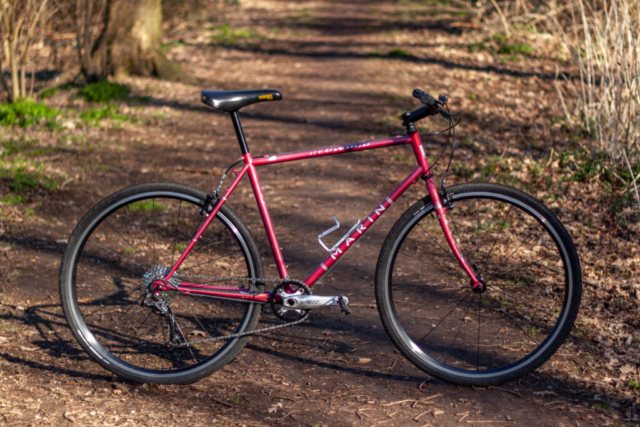 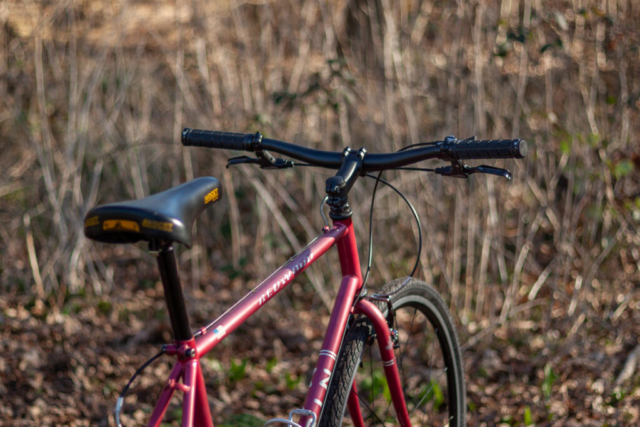 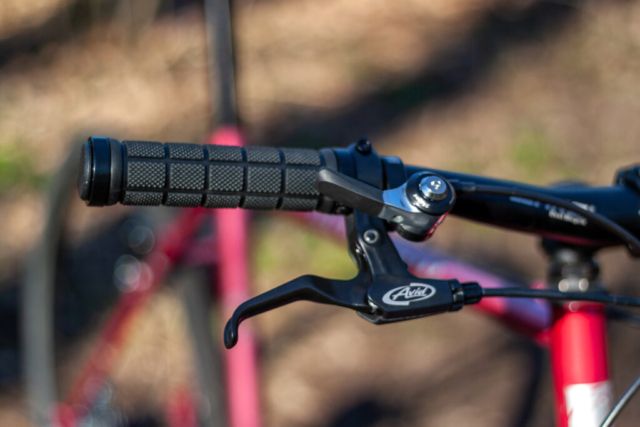 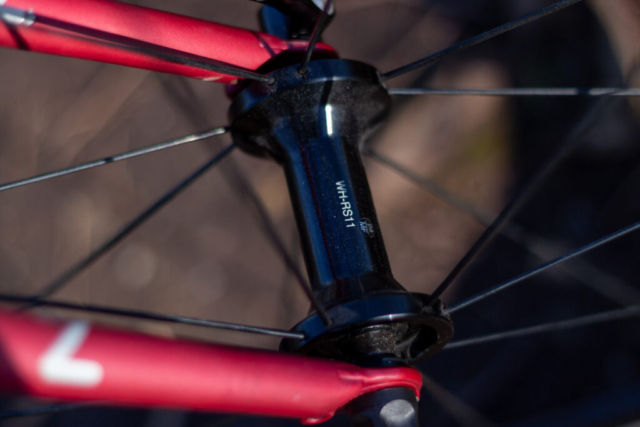 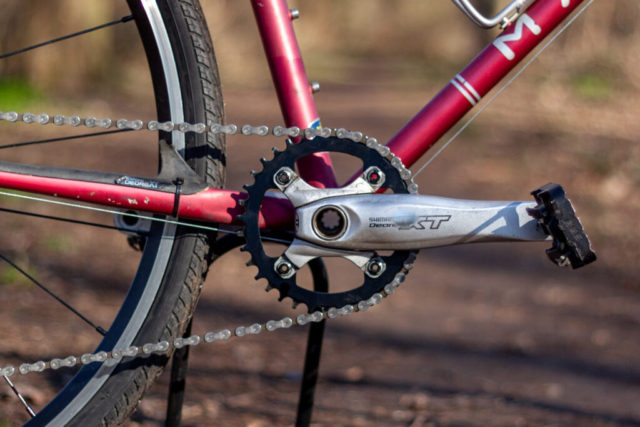 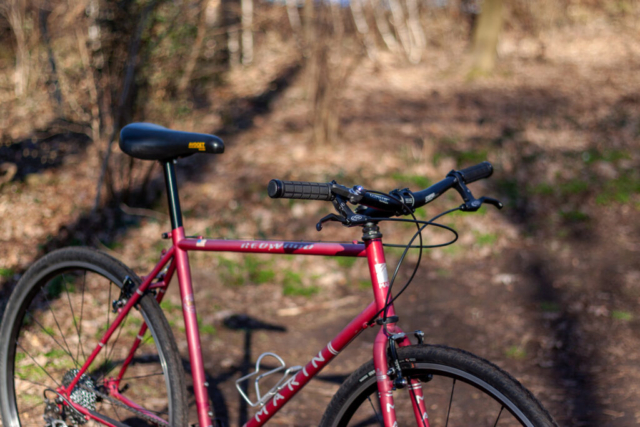 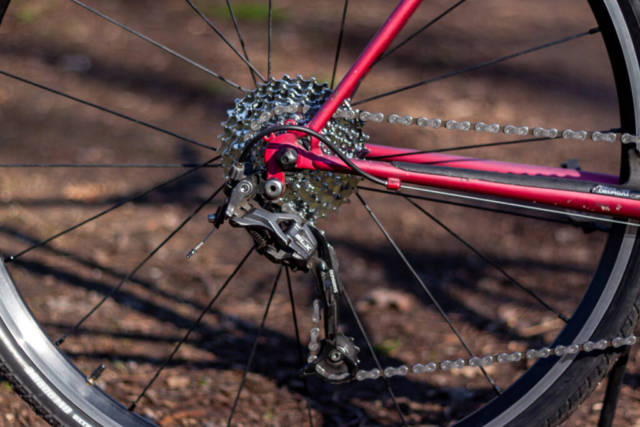 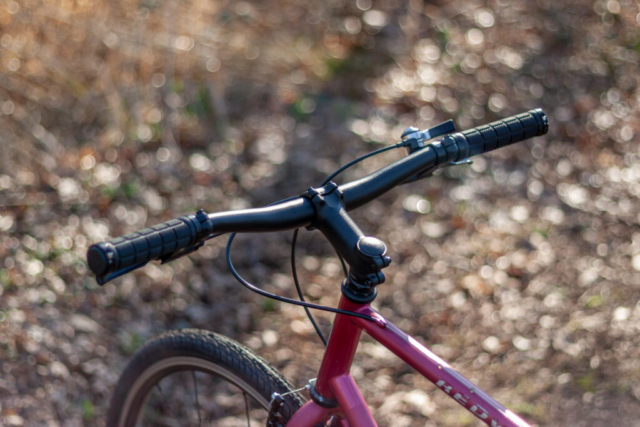 Since then I managed to convert the shifter into friction mode (by removing two tiny little ball bearings from inside—thanks si_mon628 for the idea!), which is something I wanted to try for a long time. This also meant ditching the Ritchey barrel adjuster—thank you for your extremely short, albeit good service! Friction shifting means no fiddling with indexing adjustments ever again, it’s plug-n-play. I love it so far, and the whole idea behind its simplicity is awesome. Welcome to the past I guess?

This iteration of the Marin is the GOAT. That’s it, plain and simple. It’s just too good. Handling is crazy good, the setup is comfy and the bike is noticeably faster. Next step will be installing fenders and 700x32C tyres, hopefully quite soon.