The last time I featured this bike here was when I installed flat bars on it. Grave mistake. I mean both the scarcity of posts and the flat bars. This thing needs drop bars, which I realized about 2 weeks after I ditched them. I fiddled a lot with the saddle, stem, bars and basically the whole bike in the past year. Now it is as dialed as it can be. Well, I say this now, but then I already know I will change things in a month or so…

So it started out like this. Long stem, the good old XLC drop bars, some XLC brake levers and a single bar end shifter for controlling the rear mech. Oh, and I lusted for a Brooks C15 for about 4 years or so, and finally I found one that didn’t cost an arm and a leg. 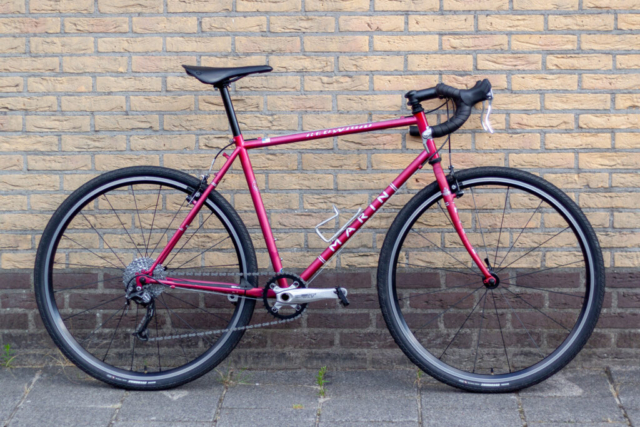 I took the bike for a few 30-40 km trips, and I came to the conclusion that the saddle was not at all compatible with my bottom, which was a real pity. What I also learned is that I’m way less flexible than what I thought. It was time to change things again. I tried a few saddles and in the end I settled with a B17, which is a pretty safe choice overall. The cockpit also needed to be sorted out, for which I sourced a fishy-looking Ergotec High Charisma thingy, which is indeed very charismatic, has a ton of rise and a short reach. Then I struck a ridiculous deal on a pair of NOS Deda Gravel 100 handlebars, which I have installed right away.

Shifting was relatively okay, but I wanted it to be better. I removed the rather worn SLX rear derailleur, and installed a nearly NOS condition XT RD-M739 instead. The cassette was also swapped to a mint 8-speed XT 737 model. Both of these came off the Minerva by the way.

I wanted to try downtube shifters for a change. Found some SunRace clamp-on shifters, installed them, and I was really pleasantly surprised by how extremely well they work. Super snappy, very satisfying clicks, and it was on accurately on point every time. 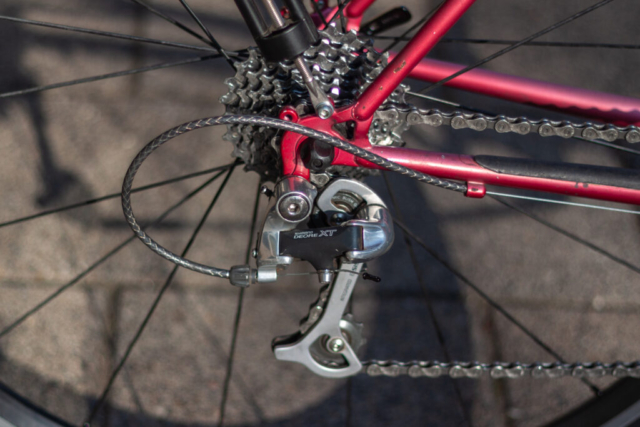 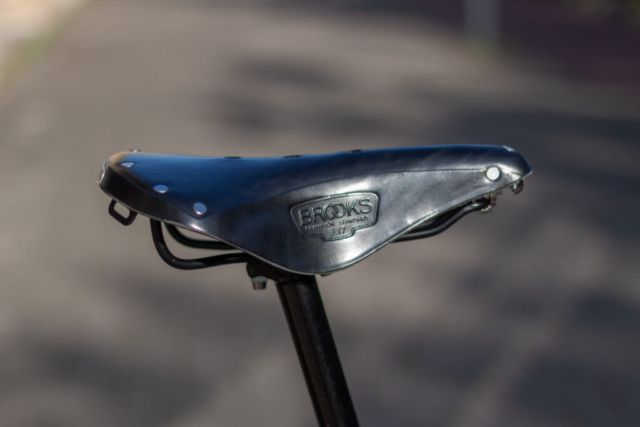 The inner tinkerer never rests. Even though the bike was pretty comfortable and perfectly capable of everything I needed it for, I wanted some upgrades. First came the thumbie. I took the SunRace thumb shifter that I used for the flat bar iteration of this very bike, hacksawed the clamp down, then bolted the whole thing on a 31.8 front derailleur adapter. I wouldn’t imagine such a bodge would work so well, but it did! 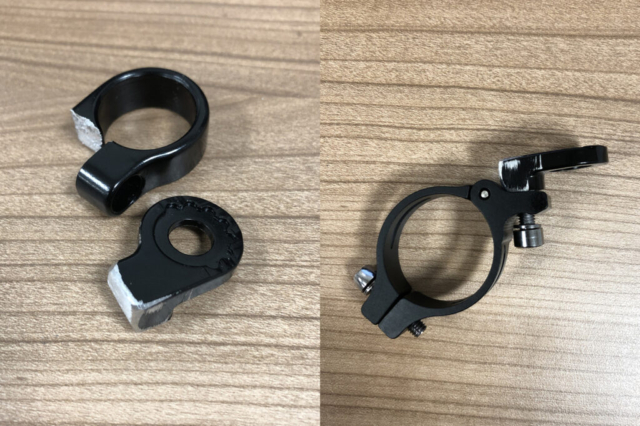 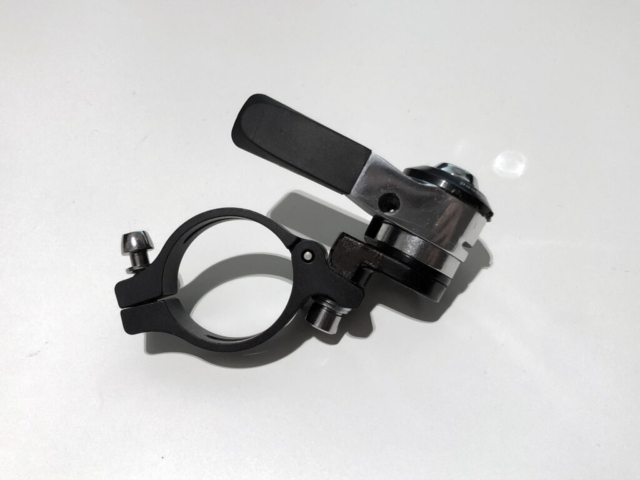 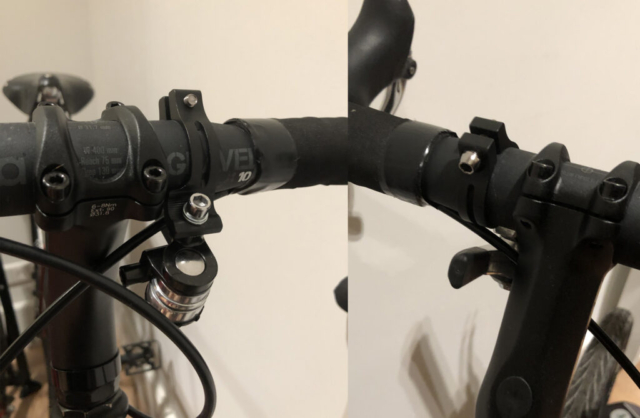 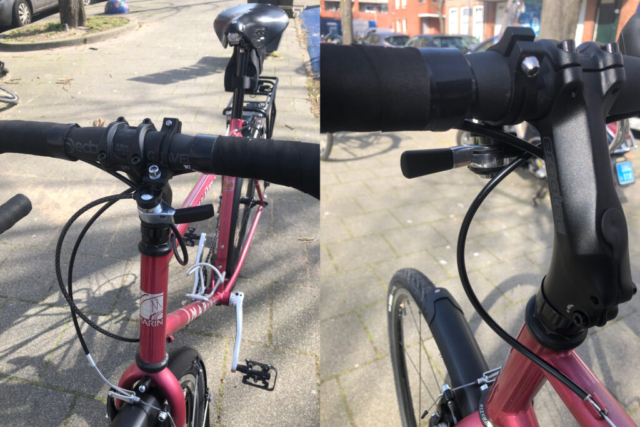 I don’t want to take credit for this idea, I have seen it on the Bike Forums a couple of years ago, although with trigger shifters instead of thumbies. So now we’re at 1×8, comfy shifting, not a whole lot of gear range, but generally enough for my kind of riding.

I was playing with the idea of going 2x, but with the triple XT crankset it wasn’t going to work. The chainline was already off and I wanted to install a bigger chainring, which could only go to the outer part of the crank. And then luckily I found a compact Shimano double for sale for rather cheap. It was (still is) pretty scruffed, but perfectly usable.

It came with a pretty worn big chainring, but thankfully I had quite some stock of 110 BCD in my drawer. I chose a rather sensible 46T Deore DX chainring. Did it fit perfectly? Hell no. But after some careful filing I could make it work. And then came the question – how will I shift from one chainring to another? Well, with the 700CX front derailleur of course, that originally came with the bike. And with the other half of the downtube shifter that I used beforehand.

There was one more extremely importand update during this phase: mudguards. It’s the Netherlands after all. SKS Bluemels in 45 mm width. Installation and fine-tuning were all easy and the result is very satisfying. And so the next iteration of the bike was born. 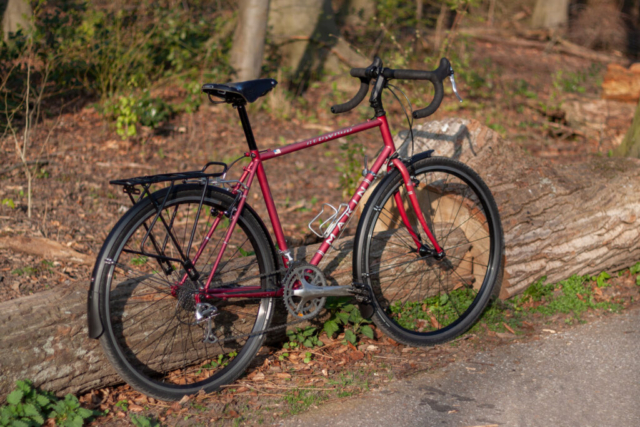 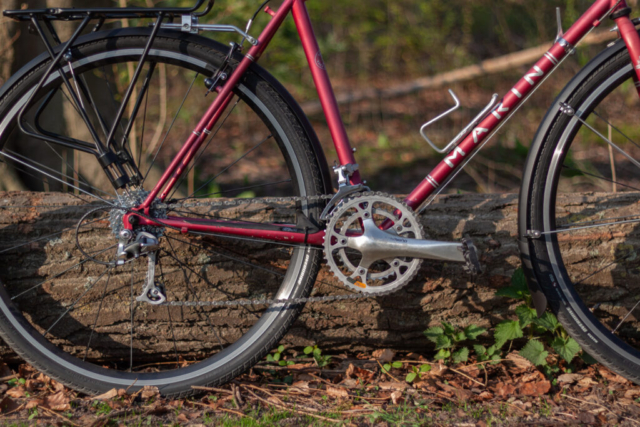 Once again, absolutely no reason to change things. Seriously. This just worked so well, it was very comfy and capable, with more than enough gear range that I would ever really use. But there was this tiny thought scraping the back of my head. Ahead adapter. Headset junction. Quill stem. Aesthetics. What aesthetics? This bike has absolutely none.

This was the longest time I was (over)thinking on an upgrade before actually pulling the trigger on some parts. I considered every single sensible option, and settled with the cheapest. A Procraft (rebranded Kalloy) stem and the same type of Decathlon 25.4 compact drops as I used on the Koga. I wanted something flashy, like the Velo-Orange removable faceplate 31.8 quill, but I just couldn’t justify spending almost 100 bucks for a stem alone. Upon aimlessly browsing the local ads, I actually found a set of 10s Veloce brifters – you guessed right, for a very sensible price. I checked the ol’ chart, and yes, 10 speed Campagnolo shifters work wonderfully with 8 speed Shimano drivetrains. I’ve done a Shimergo (Shimagnolo?) conversion in the past on this very bike and loved it a lot. It was time to do it again. 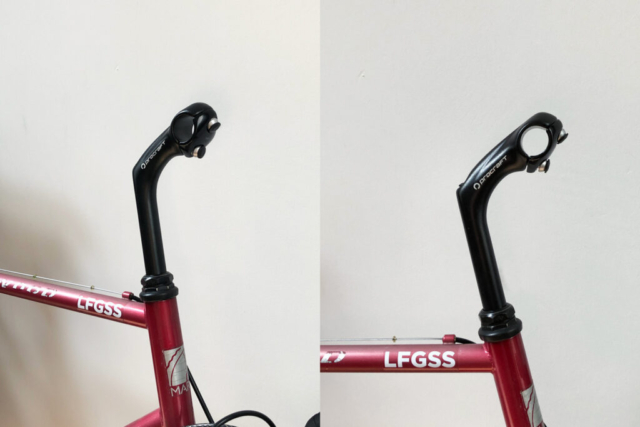 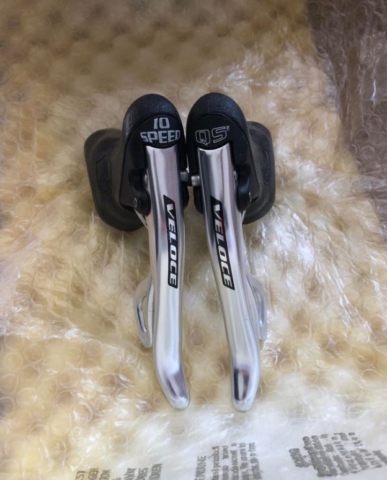 I love a challenge, but with bikes I also love when things work fine at the first try. This was the case with this conversion. Measure, cut, tape, go. I literally didn’t have to touch the barrel adjuster, the indexing was on point right after I tightened the cable clamp bolt on the derailleur.

So this is where we stand at the moment. I blacked out the logo on the stem with a sharpie, adjusted the rack a bit, added some awesome stickers and it was done. Perfection. Well, at least for me. The only things I am considering changing in the short term are the saddle and the tyres. I have a number of options in my head for both. But I won’t spoil it. 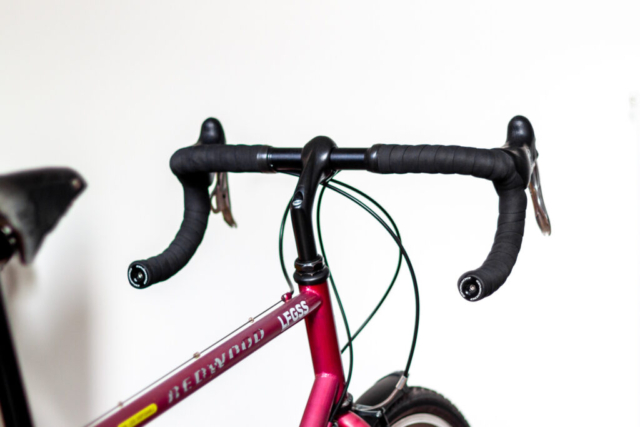 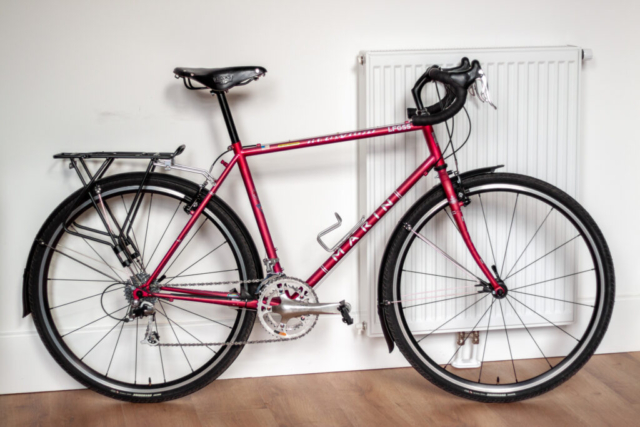 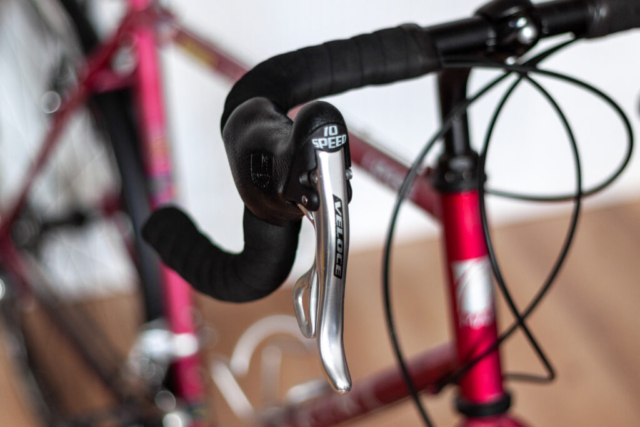 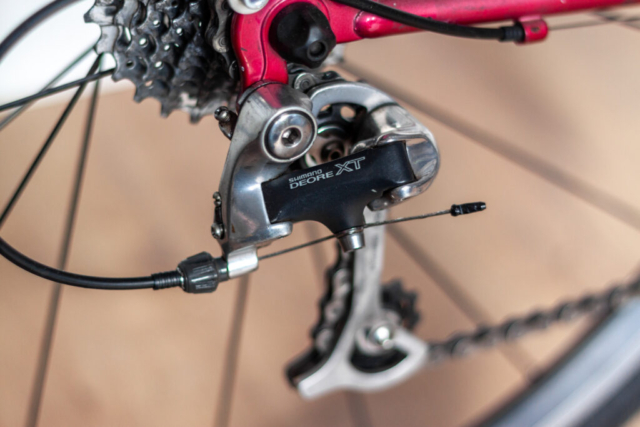 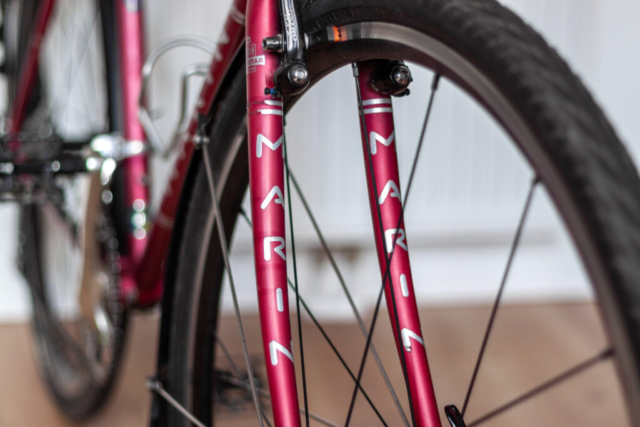 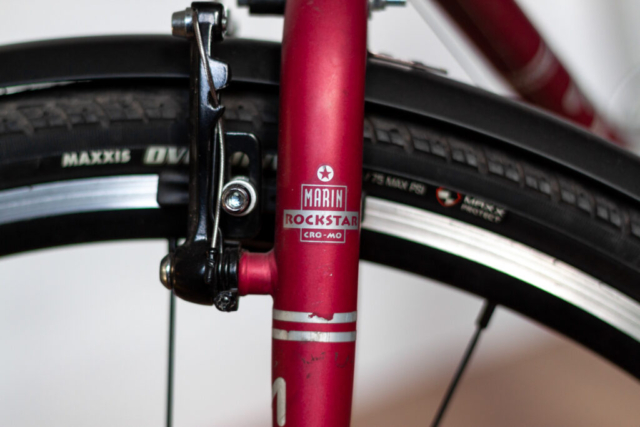 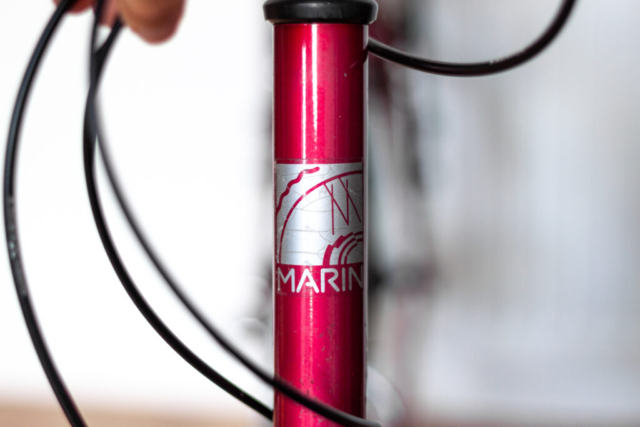 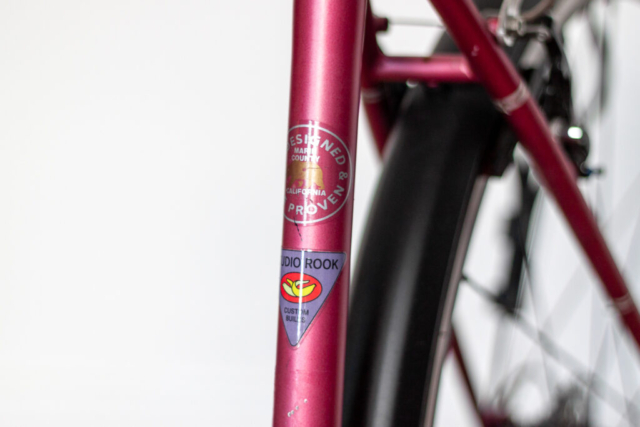 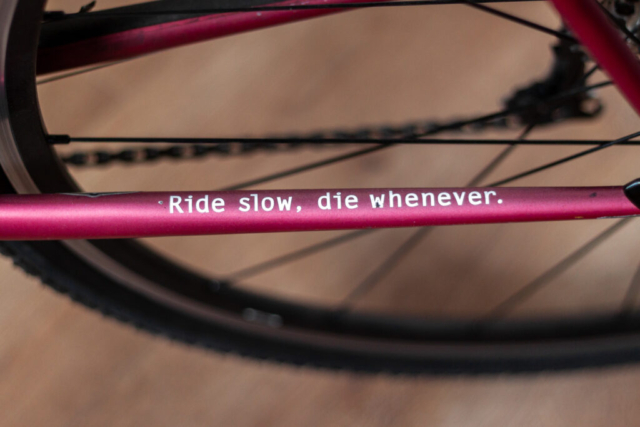