I saw a listing of a cheap, beat up Koga-Miyata, that had some cool 105SC parts. I contacted the seller and went to pick it up straight away. I really didn’t care about anything except for the shifters and brakes, so only when I got home I noticed that it had a straight-blade carbon fork, and that the frame was my size (well, a little bit on the smaller end, but still well within my tolerances). After some Googling it turned out to be a Prologue model, from the year 1992. Well, the frame at least, I don’t think any other components were original. 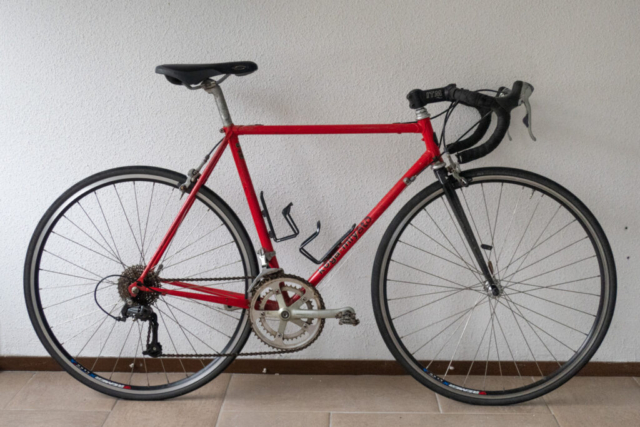 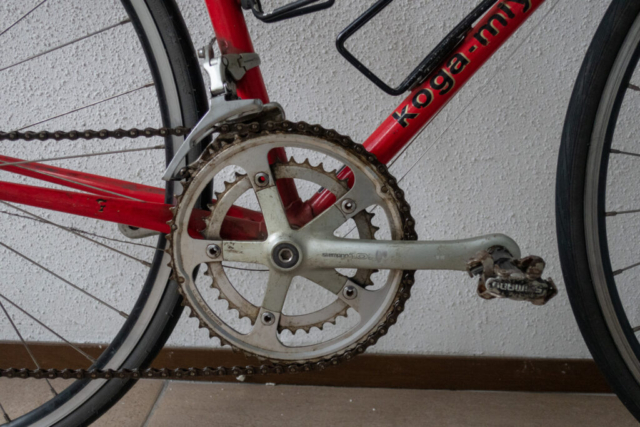 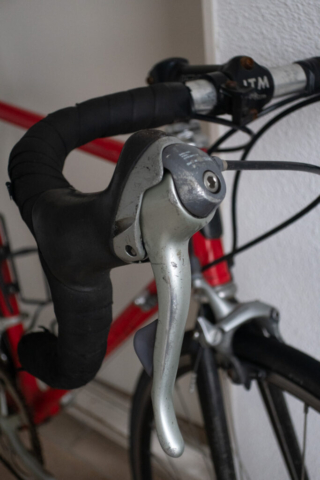 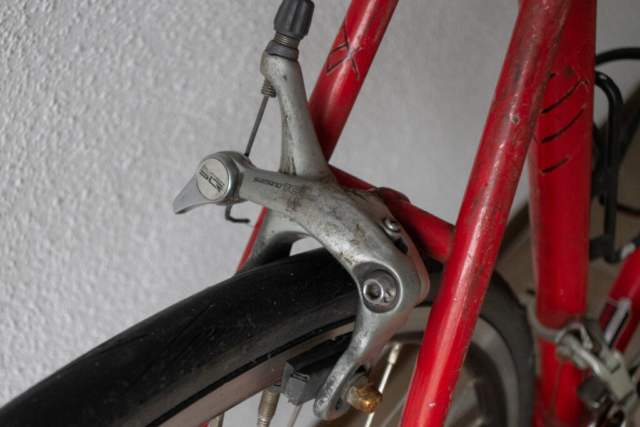 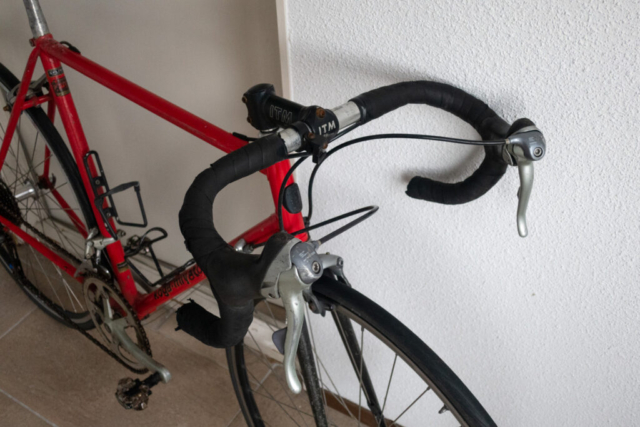 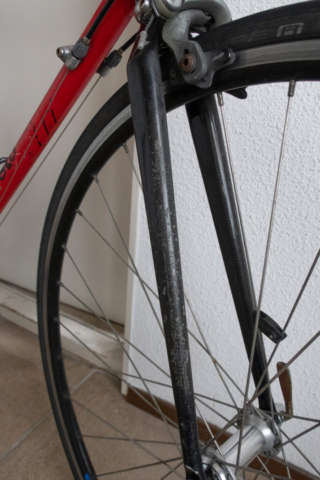 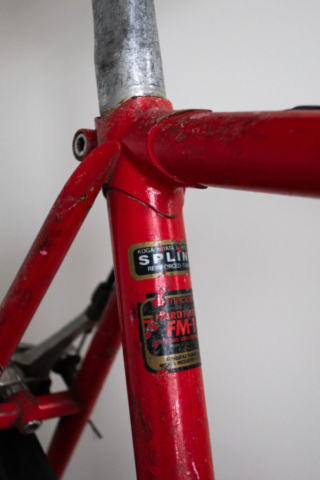 Some side story, I started the whole bike tinkering hobby some 7 years ago. I have been riding actively for the better part of the last 12 years, but I really only got into the DIY region when I got myself a vintage KTM Strada road bike. The fixie-skidder mania hit our country around that time, and of course I had to build an ugly, not very functional, and needlessly expensive fixed gear bike. Then later on I used that bike with a freewheel for quite a long time, it was my daily commuter, but then the retro MTB love hit me, and I sold the KTM to fund other builds. This project was the first, the one that basically jumpstarted my “bike mechanic” career.

So my first project was a single speed, and I haven’t had a proper, skinny-tyre ss bike for a good while. Since the Koga came with sliding dropouts and a cassette rear hub, converting it is extremely easy—theoretically. But first things first, I needed to clean the whole thing (the pics above were taken after some light cleaning only). The amount of dust, grime, mud, oil, grease and other stuff that I removed was ridiculous. I have seen a lot of neglected bikes, but this was truly on another level. After a few days of stripping, disassembling, scrubbing, lubing and reassembling, it turned out quite okay actually. Also, someone actually painted the “ata” part from Miyata with a sharpie, because the sticker got scraped off there. I don’t know who it was, but I respect you for the effort!

Below all the grime and surface rust, the components turned out to be in a rather good shape. They definitely weren’t nice, but they functioned well. One thing was sure right off the bat, I needed a longer seatpost. I kept the 105SC crankset, took the big ring off, had the 39T smaller one on, then spaced out the bolts with M10 spring washers. The cheapest single speed chainring bolts I could find (within the country) cost €15, while I paid €2.14 for a 100-pack of washers to be exact. Works just fine, doesn’t look half bad.

Meanwhile I finally gave in and ordered a work stand, BB and headset tools, a huge adjustable wrench and some other necessary tools. 7 years of tinkering without these… Taking a look back I feel so stupid not buying all this stuff much sooner. Oh well. This meant I could service the nice Stronglight pin-bearing headset (which really needed some grease), and I could replace the BB. 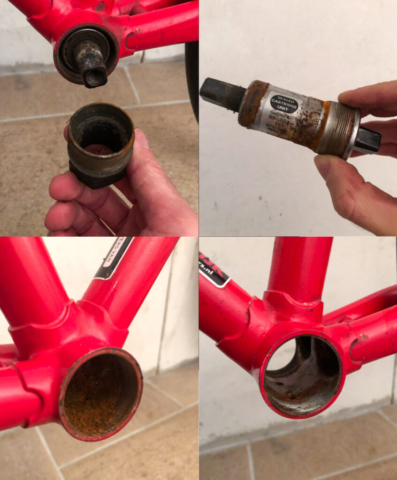 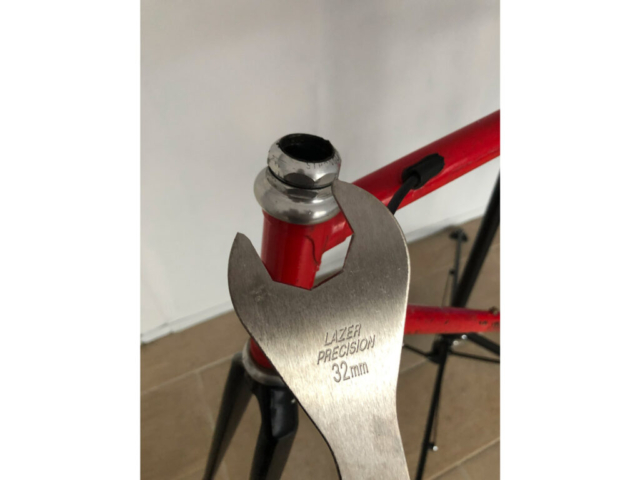 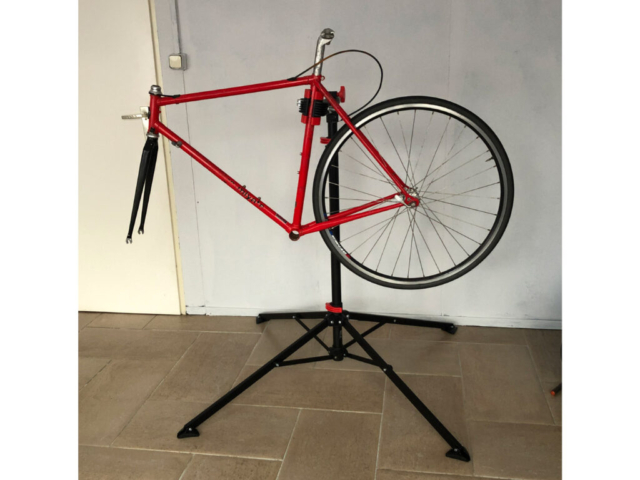 The Sora 3300 hubs really needed some servicing, the front one was especially horrendous. Even after replacing the bearings it’s still rough—I guess the cones are worn, but for a budget build like this, I don’t really care. It still spins, and it doesn’t have any play. The Schwalbe Lugano 700x25C tyres, that came with the bike turned out to be in a really nice condition, and they look kinda good, so I decided on keeping them.

I was undecided about the cockpit setup for a long time, but in the end I went with drops. Decathlon has 25.4 compact drops that I wanted to try for a few months now, and this was the perfect opportunity. However, there were none in stock of course, so I had to wait for them indefinitely. Meanwhile I put the bike together with a temporary handlebar setup: quill adapter, 100 mm Ergotec stem and the XLC HB-R05 bars I used to have on my Marin. I ordered some cheap brake levers from the Far East, and they are absolutely horrendous in terms of quality (full of burrs, squeaking, rubber is very hard etc), but they didn’t break yet, so that’s a win I guess. The result wasn’t that bad, but it wasn’t nice-looking either. 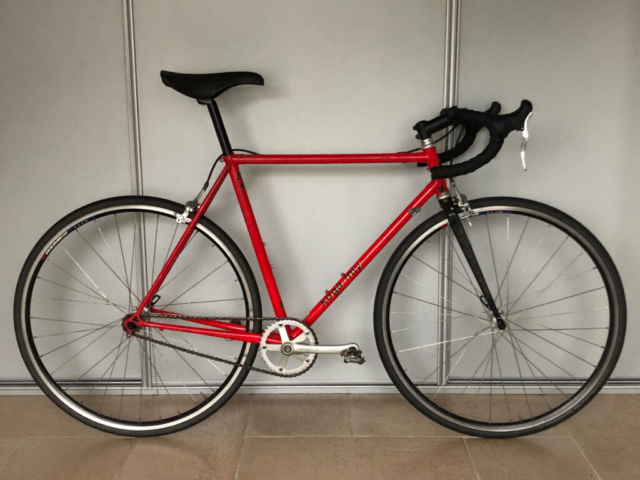 Needless to say, about 30 hours after putting all this together, Decathlon notified me about new stock arrival. I ordered the bars, a new chain (turns out the old one was worn beyond 1.0) and new bar tape. It was a real struggle to get the bars through this single-bolt 3ttt quill stem, took me about 15 minutes of swearing. I had to really force it open with a screwdriver, way more than I’m comfortable with, but in the end it was worth it. No cracks, no major scratches, and it looked so much better than the previous setup! 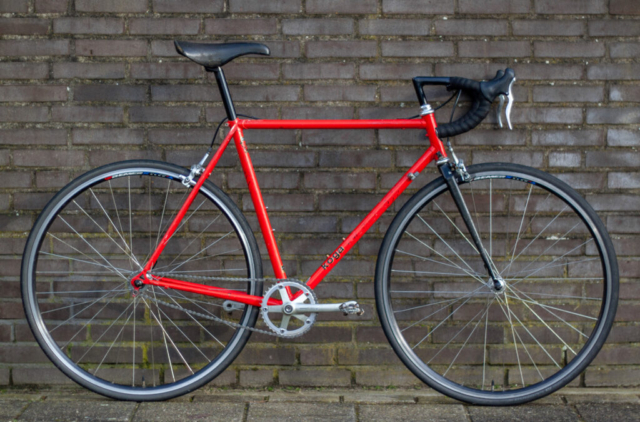 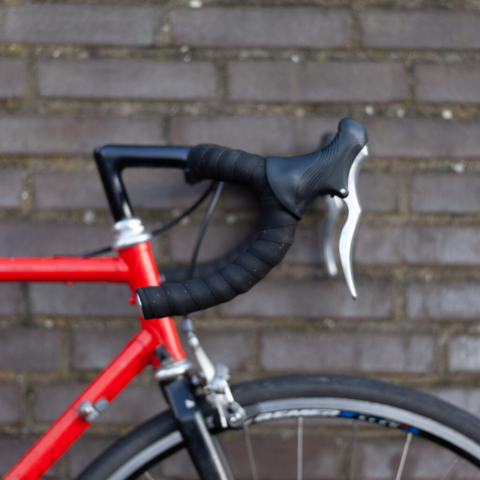 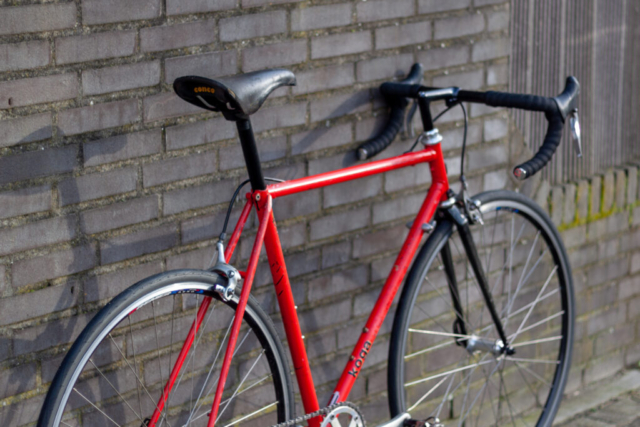 I want to say nice things, like how it rides like an absolute dream, and how comfortable it is. But that would be far from reality. However, it wasn’t built with the purpose of being nice, instead it’s a cheap beater, that was essentially saved from being trashed. Nonetheless, it’s fast, agile and light, and it looks bloody rad in my opinion, but I would need a shorter and much taller stem to really enjoy a nice and long ride on it. Also, braking power is surpisingly good given how I went full cheapskate on pads. My only major issue with the bike is some toe overlap on the front wheel, but I can live with it. Next step will be removing the shift cable guides from the bottom headset cup and the shifter bosses from the downtube. After that, who knows…